Karamanti launches official website and turns up promotion in Jamaica 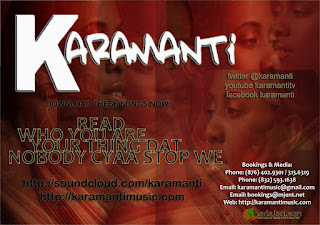 To say Karamanti is busy would be a gross understatement. Since returning home (from a little over a month in North America) Karamanti and her team have been putting together a full promotional campaign with the intent to finish 2012 as strong as or even stronger than they started.

For starters, the artist has made public her official website which will host all things related to brand Karamanti; http://karamantimusic.com.

Additionally, Karamanti has now released the video for her single “who you are” on local networks in Jamaica. The video which was released online approximately one month ago is now in regular rotation on stations such as Hype, RE, CVM PLUS and others. It was added to Hype TV’s you tube channel only this week so persons outside the country can check it out here: http://www.youtube.com/watch?v=5mshOtspPvA

Person who operate blogs and e-magazines may download the video for posting on their site, the download link is: http://www.sendspace.com/file/2yk41z

Karamanti singles currently in regular rotation on Jamaican airwaves are:

4.       Nobody cyaa stop we ft. 3 Star (produced by RedBoom): http://soundcloud.com/karamanti/karamanti-3-star-nobody-cyaah

All four singles along with their respective TV tracks can be downloaded at: http://www.mediafire.com/?184s63tut4q75dg