ORISHA SOUND POWERS HER WAY THROUGH JAMAICA AND AMERICA 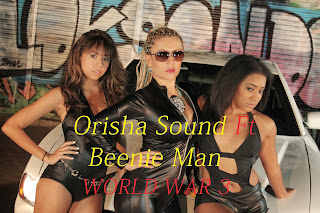 World/Pop recording artist, Orisha Sound and is now being called one of the hardest working women in the music industry. As she travels back and forth between her home in Kingston, Jamaica and Los Angeles, California, Orisha seems to always be engaged in a new promotional or production campaign involving her songs, videos or reality show.

After returning to LA from Jamaica a couple weeks ago, Orisha Sound filmed two music videos, one of which was for the new single “world war three” featuring the dancehall king Beenie Man. She conducted a total of six interviews, doing three in one day. Interviews were done for Playboy Radio (6 million listeners), Bishop Don Juan Radio Show (with Snoop Dogg), Artist on Demand (in New York), Real Talk for real Teens in Atlanta, Global Voice radio and Rocking DTS radio. In between her radio interviews, Orisha Sound continued to film the final episodes for the first season of her reality TV series, Project O, which is now being aired on Punch TV (which is on several networks across the USA and coming to Direct TV soon).

Having now completed her immediate duties in the USA, Orisha Sound returns back to Jamaica and switches gears, as she gets ready for her performance on the Chris Brown show which is scheduled for early December,  as well as the GT Taylor Reggae Christmas Extravaganza scheduled for December 25th.

Finally, Orisha Sound fans can expect the momentum to continue in 2014 as she plans on premiering the “world war three” (ft. Beenie Man) video on BET in early January as well as release a remix version of “embrace it” featuring Sizzla Kalonji.