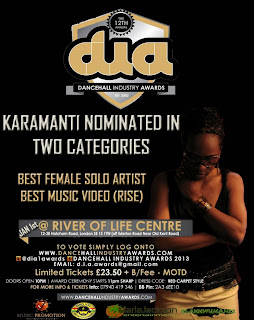 Voting is done by the public and the award show is scheduled to take place on January 1st in London, UK. To vote for Karamanti as the Best Female Solo Artist click the following link: http://www.dancehallindustryawards.com/best-female-solo-artist.html

Watch the “Rise” video here: http://www.youtube.com/watch?v=qUwHTlc9Lqc
To vote for “Rise” by Karamanti as the Best Music Video click the following link: http://www.dancehallindustryawards.com/best-music-video.html

In honor of Karamanti’s nomination check out the NOMINATION DANCEHALL MIXTAPE: http://www.youtube.com/watch?v=lOtZcUJBw7I

12 years young and still going, the Dancehall Industry Awards has become a part of the London music scene, giving accolades to rising stars, dancehall fans and local business's, the amazing Award show has gone from strength to strength.

Hya P launched D.I.A (DANCEHALL INDUSTRY AWARDS) on the 1st of January 2002, this was the first dancehall award ceremony of its kind, not only awarding artist, performers and DJ's but also members of the community in the UK.

Each year the awards attracts some of the largest multicultural audiences, over the last decade D.I.A has played host to the urban music industries finest, witnessing performances from both UK and international talent. Each year awards are given out to each individual nominees from a selection of categories including best community radio, best disc jockey, song of the year, best recording artist of the year, best video etc.