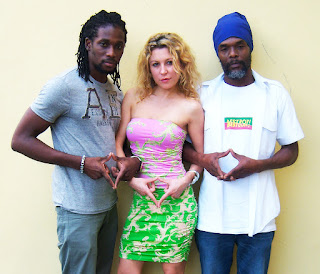 Jamaican producer, Sheldon Williams recently got together with California based pop star, Orisha Sound, as he was contracted to produce some Reggae songs on her upcoming album. One of the tracks they were working on was a collaboration with Reggae/Dancehall star Sizzla Kalonji entitled “embrace it”.  On the morning of Sunday, February 17th at approximately 12:30AM while the two were leaving a salon at Pavillion Mall (in Half Way Tree), they were robbed at gun point and Sheldon was shot once while Orisha Sound managed to escape (this was her second trip to Jamaica).

Sheldon, also known as Shel K spent a week in the Kingston Public Hospital where he underwent surgery to remove the bullet and continued his recuperation at home once he was discharged. Both Shel K and Orisha Sound recounts that the reason they were at the salon so late is that they were getting ready to shoot the video with Sizzla Kalonji the following day and time was of the essence. They believe that persons in the salon over heard them speaking and assumed that they had a lot of money on them and as a result arranged the robbery. Though both Shel K and Orisha had their laptops and other costly gadgets on them, all the robbers took was $40,000 Jamaican dollars. 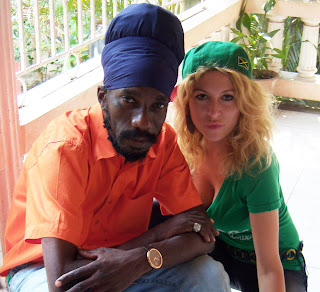 Determined not to lose this opportunity, Shel K immediately got back to work once he was able to. Now weeks later, all three songs are complete and ready for release. Universal Records, Orisha Sound’s record label, is ok with the Reggae songs being released to the public ahead of the full length album. As such, disc jockeys and Reggae enthusiasts may download Orisha Sounds Reggae songs (produced by Shel K) here: http://www.mediafire.com/?exiku7nops7usdi

Watch the behind the scenes of the Sizzla Kalonji/Orisha Sound video shoot here: http://www.youtube.com/watch?v=AgDN_Z6A-xs the official video will be released shortly.

Video clip of Shel K in the hospital after being shot: http://www.youtube.com/watch?v=5TuQstLHjTk

At age four, while other girls were focused on playing with dolls, Orisha Sound was practicing the violin, piano and singing, preparing for her destiny. She knew at a young age that music made sense to her and it would be a part of her fate. At nine years old, she was a child-prodigy virtuoso, touring in Europe and the United States. Since then she has appeared on stage and in studio with Stevie Wonder, Stanley Clarke, Anthony Hamilton, Devante Swing, Flo Rida, Bone Thugs N Harmony, Sizzla, Sly & Robbie, Jae Deal, and many others.

Separating her from other young pop divas, Orisha developed a truly strong-minded persona as a result of her time on the road, while staying humble and real. Merging inspiration from performing and recording all around the world, Orisha makes a nod to many genres and cultures in her music. Her compositions combine elements of electronic, dance, alternative, hip-hop and world music. “I don't stay in one place - I move a lot - enjoying the beat of the streets and the studios of LA, Moscow, Kingston, London, Paris and NY... It’s all about the people and their love, hate, sex, faith, fun and struggle. It’s a ‘F**k the police’ mentality."

This fun loving, rebel singer/musician plays 16 instruments and simply doesn’t neatly fit into any genre box. Blending crisp beats, sultry vocal appeal and chic powerful “Euro” styling, she has positioned herself to fully grasp the ever, elusive dream of pop/crossover recognition. Orisha’s talent and potential will shatter all assumptions about what a new artist can achieve, as she delivers the soundtrack to her personal story- from a child prodigy, to sought after musician virtuoso, to a powerful international artist. Her goal is not to become a duplicate of those that have come before her, but rather to be the first Orisha Sound. As Billie Holiday put it, “No two people on earth are alike, and it's got to be that way in music or it isn't music.”

After Orisha’s “Beautiful Sin” single release on InGrooves Fontana and Universal Records, several major labels were trying to get Orisha Sound on their roster and be the one to release her latest 15-track album “AR-15”. Recently she made a decision to team up with the notorious Suburban Noize Records and Sony to distribute her project worldwide (produced by Billboard Platinum producer Andrew Lane, Atlantic Records producer The Composer and Jamaican producer Shel-K) on June 11th.  Album features duet with legendary reggae artist Sizzla, singer Wayne Daniel and DJ Rusky Rusk. Songs were written and co-written by Orisha Sound and recorded in Boom Boom Box and Brandon’s Way (Los Angeles), Mixing Lab and Tuff Gong (Kingston) and Melodia (Moscow).

Orisha is no newcomer to the music industry and this budding star is setting the stage for a prosperous long career. Keep up with the antics of Orisha Sound at www.orishasound.com