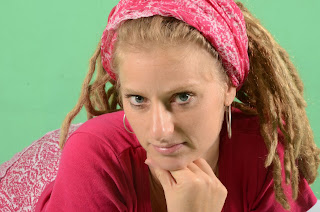 German Reggae/Dancehall artist Roots Queen is making an impact with her first studio album, “Powerful Energy”. The album got an extensive review from one of the most respected Reggae magazines, Reggae Ville, and it is safe to say that “Powerful Energy” will catapult, Roots Queen directly into the spot light. Persons may read the review and form their own opinion by visiting;
http://www.reggaeville.com/nc/artist-details/artist/roots-queen/release/powerful-energy/ac/artistReleases/lead/review/update/1.html

In addition to getting a great review from Reggae Ville, Roots Queen debut single “feeling free” spent nine (9) weeks at number one (1) on the Reggae chart in the UK, seven (7) weeks at number one on another Reggae chart in the United States and was number four (4) on New York’s top 30 Reggae Chart. While the latest single, “fly with me”, is currently number two (2) in the UK and getting rotation on Reggae shows all over.

Manager Steve Stephens said about the new album. "I will never forget the night I sat in Roots Queen studio in Germany and heard the album for the first time. I just could not believe my ears and by the time we got to the last track I knew not only that Roots Queen was a special talent but that we had an album full of potential hit singles!!”

Recently Roots Queen spoke with Sir Daddy D on Reggae4Us about the album, her career and a slew of other things. Persons may download and listen to that interview by clicking the following link: https://docs.google.com/uc?id=0B7uMo-A6uU9aazF3U3htcE9fRFE&export=download

Future interviews include Saturday October 5th 4pmEST on Reggae in the Fields, Canada's longest running Reggae show with Junior Smith which airs locally in Ottawa as well as online at www.ckcufm.com. And Monday October 7th on Donny Walker's New Music Mondays at 8:45EST on www.Globallinkzradio.com. Manager Steve Stephens is currently taking interview requests for Roots Queen ahead of her trip to Jamaica which is scheduled for November. Media houses that would like to feature Roots Queen should send an email to karmamedia9@gmail.com or rootsqueenmusic@gmail.com